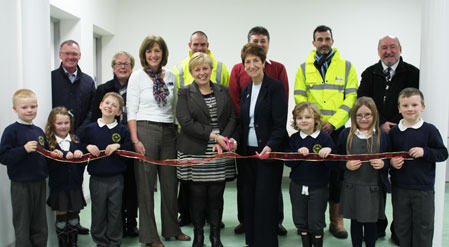 Headteacher Kevin Arthur said "We are thrilled with the new building especially the community hall as well as a new SEN room and a much bigger office, ensuring all enquiries are dealt with in one place, whether they relate to School or the Childrens Centre."

"Having Mary open the community hall made it even more special as she has been extremely supportive of the school for many years, not only as an MP but also a school governor."

"We were also thrilled that Councillor Norma Redfearn was able to join us, as she was instrumental in the creation of our breakfast club many years ago."

Chair of Governors Bill Appleby "The Governing body has worked very hard to get the new extension, so today is really the icing on the cake along with the guests who have turned up today."

Guests were treated to songs from the Key Stage 1 children as well as well as refreshments.